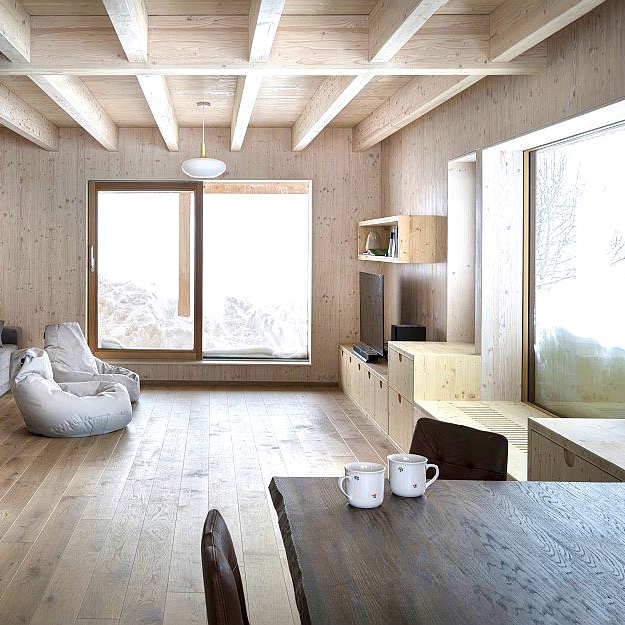 Inspiration: Way out of the city

"From the beginning, we enjoyed the smell of wood. It's an enormous difference from brick buildings, which tend to feel damp and cold during construction.” Says the owner of a beautiful wooden house, which shows how a current interpretation of a country house made from Novatop CLT looks like!

Each of us has our favourite place, where he likes to return whenever possible. For our host, sports enthusiast, and nature lover, Šumava (mountain region on the border between the Czech Republic, Austria, and Germany) has been such a place since childhood. Although his work duties took him to the capital, he owned an apartment in Šumava for several years, which functioned as a weekend retreat. But the real dream of the owner and his family was the family house, which eventually, despite some challenges, became a reality.

He did not start the project alone, because his friend had the same intention. Word got out and a plan was born to build a semi-detached house, which will be used primarily for weekend getaway. It was originally supposed to have been built on a completely different plot of land than the one we stand on today, but sometimes in life, one’s dreams don’t always materialise. The zoning plan did not allow the intended project to proceed. The friends did not give up their plan and the search for another, suitable plot of land began. One of the last undeveloped plots was finally purchased in Kvilda Village. The land itself is not large, but thanks to its location on the outskirts of the village and the adjacent large meadows, the impression of a quiet environment is completely undisturbed. "Kvilda was an excellent choice. Thanks to the high altitude (1065 mtr above sea level), it is still snowing here in the winter and you are not bothered by the heat in the summer,” describes one of the co-owners of the house. The project could begin.

Tradition with attributes of modern living

The architectural design of the semi-detached house was undertaken by the Triarchitekti studio. "We wanted the architects to keep the character of the Šumava buildings, create a cottage with traditional elements, but at the same time with all the parameters of modern living. Let us say the current interpretation of a country house.” The two owners agreed on the form of a semi-detached house, the design was completed quickly. "The architects created a model for us, which did not change fundamentally over time, only the details were modified." The attic is designed as a relaxation zone with three bedrooms and two bathrooms in each half. Above the bedroom floor there is still attic. However, there is no simple mirroring: "Although it does not seem so at first glance, each half of the house is a little different in design, which took into account our individual requirements." The owners had a choice of construction: "We felt it would be nice to it was designed as a wooden building, from discussions with architects, a specific choice of solid CLT panel technology (Novatop) eventually emerged.” The house was completed quickly. "It has been completed in about a year and a half since breaking ground in the country. Before the first winter, we managed to install windows and cover the roof. It was only the day before the snow started to fall… “our host recalls.

When there is no cold in the mountains

The house was not planned from the beginning as a passive or very energy efficient, but in the end, it meets the low energy standard. Heating is provided by a ground-water heat pump, the implementation of which is associated with a slightly smiling story. "The well was planned to be about 120 meters deep, but at about 90 meters we came across so much water that it gushed out to the surface. We really did not expect that. Kvilda probably lies on an underground lake, "describes the owner. When asked if the owners plan to live in the house permanently, he answers: “One day, we'll see. But the fact is that we really enjoy it here and we look forward to every weekend or vacation we spend here. "

The design of the semi-detached house threw a specific factor into the assignment, but in the end, it turned out to be a great advantage. Thanks to the relatively large floor plan, we were able to use the traditional proportions in the form of a large roof with overlaps, which sits on a relatively low plinth of the ground floor, without compromising the functionality of the layout. It is designed in a mirror image, except for slightly different details, the individual apartments are identical. The house is traditional in its first expression, firmly established, as if ingrown with the ground. The slight slope in which the matter is embedded helped us in this. The owners did not want a copy of the log cabin, thanks to which we were able to approach the design from the point of view of the present and we are incredibly grateful for that. 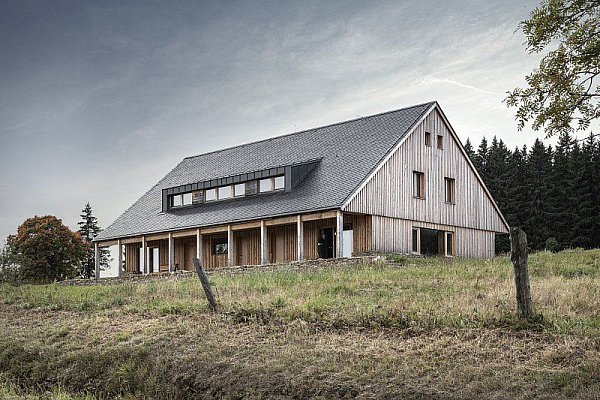 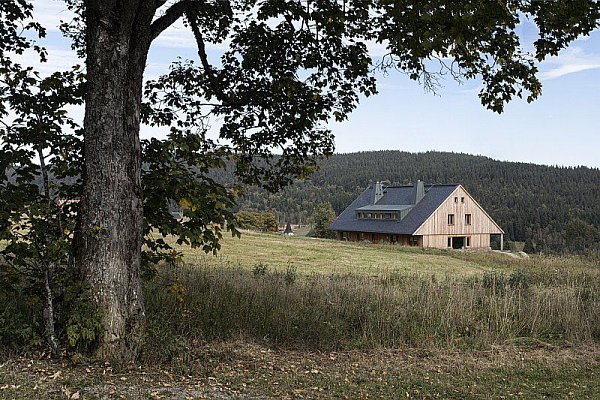 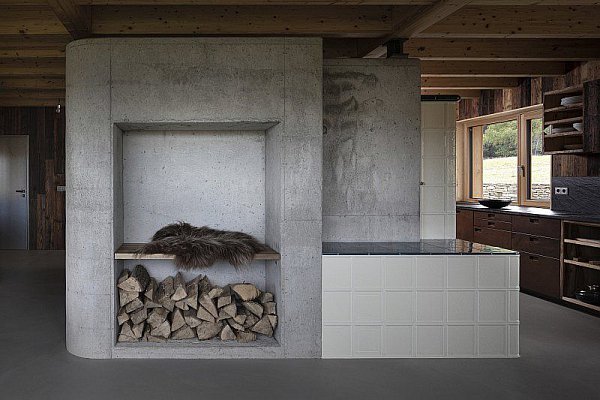 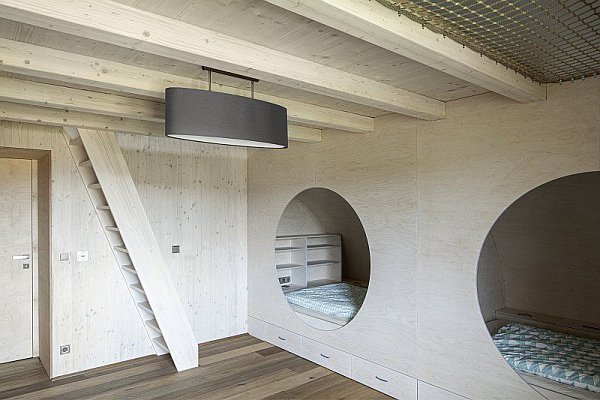 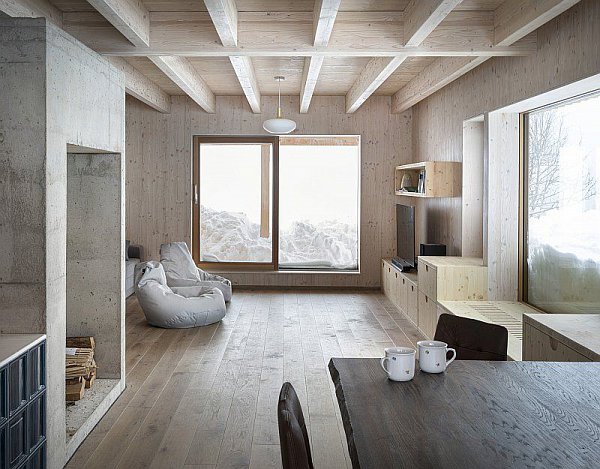 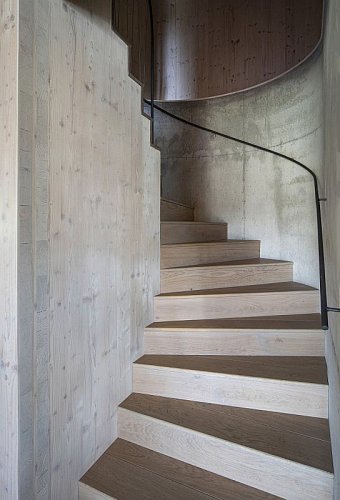 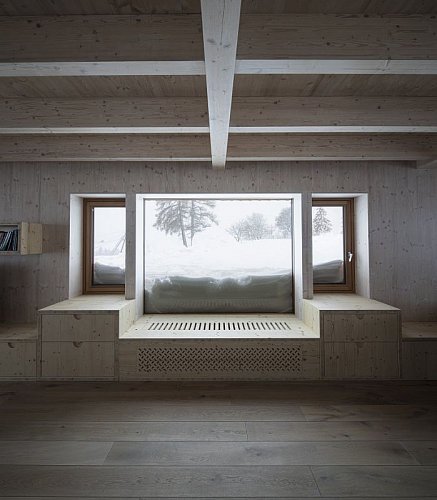 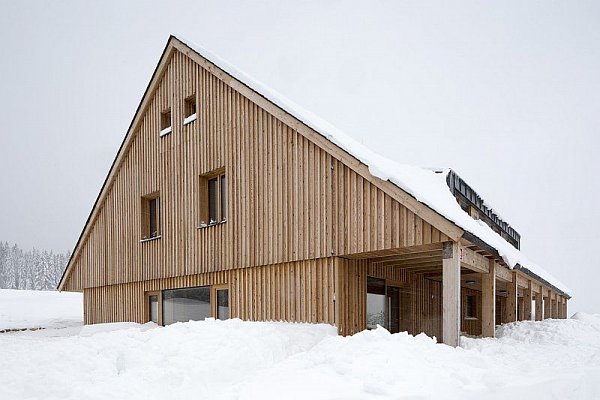 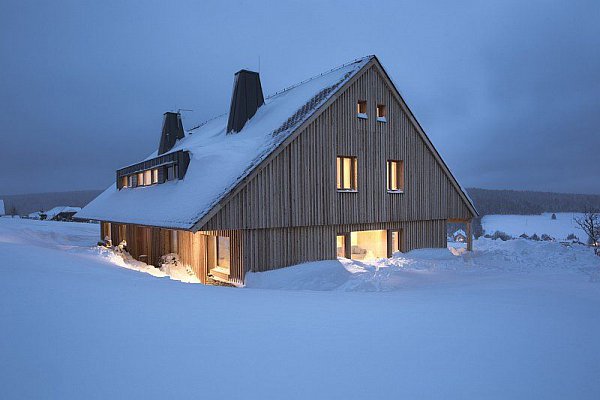 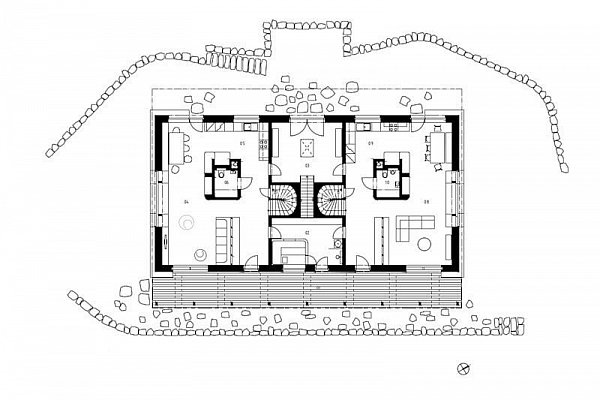 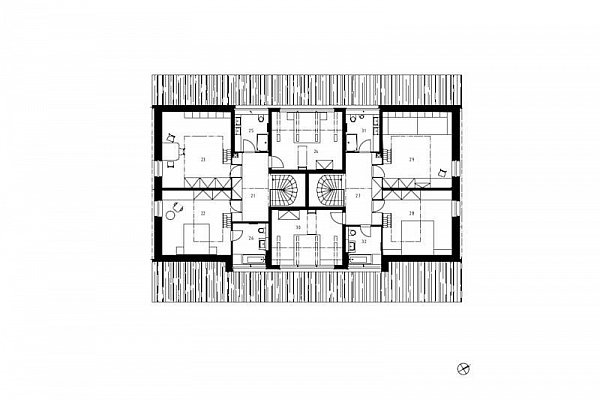