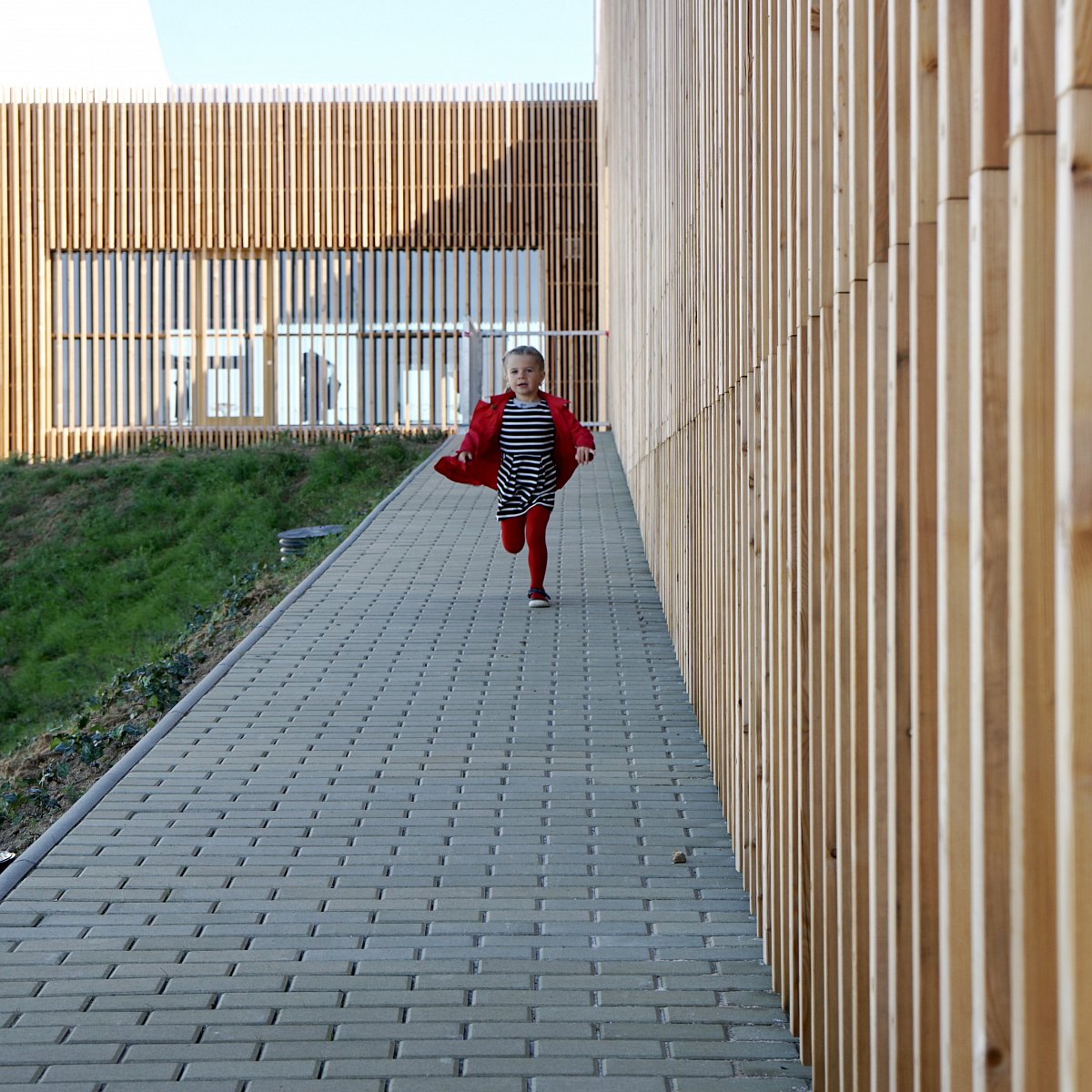 THE NEW SCHOOL SHOWS CHILDREN THE MAGIC OF WOOD

Schoolchildren from Psár (near Prague, Czech Republic) were welcomed in September by a brand new school, in classes they will not only learn history or mathematics, but also respect for wood as a natural part of the space that surrounds them.

Their classrooms, as well as the entire building, boast visual wooden surfaces. Wood or wood elements have a positive effect on the psyche, reduce stress and promote concentration. In addition, children will learn about sustainable construction and the use of natural materials. An inspiring environment, where in addition to glue laminated spruce beams and wooden surfaces in the interior, wood also appears as part of the school's exterior, in the form of larch prisms from the Czech company SECA, (also available in South Africa) will certainly contribute to making these materials and construction more obvious.

Architectural competition and a long journey to the new school

The grand opening of the school was led by a long journey, which was launched more than five years ago by an architectural design competition. The mayor of the city Milan Vácha emphasized that "the school should have a spirit, not just a building with bare corridors, but a building with lots of inspiring and pleasant spaces that will allow children to create groups, share, relax, have fun, learn and play".

In February 2014, the then Minister of Education announced the results of the competition and Ing. Sheet. Ondřej Píhrt with the team of SOA architects could enjoy the first place. For SOA, Amos Elementary School is the first school to be implemented according to their project and, given the frequent participation in competitions, believes that it will not be the last. Their aim was to create a pleasant and inspiring environment created by combining quality architecture, natural materials, and generous space. The winning design was then reworked with minimal intervention into an architectural study, followed by several years of administrative preparations prior to planning permission, investment plan and building permit. It was finally issued in April 2017. The process was complicated by the specificity of the land, the backbone networks on it, and the need to connect the school to the surrounding roads, which at that time were still only on paper.

Three years of negotiations before obtaining a building permit and another two years of construction work before the opening of this beautiful new building certainly paid off. The municipality does not plan to use the premises only for teaching, but also wants to make them a centre where the whole community will meet.

For the facade of the school the architects chose a combination of white plaster and vertical elements made of Siberian larch, which serve as a facade and also serve as a shading of windows, delimitation of space or as a safety element. Wood very often appears in other projects by the architectural studio SOA, and as Pihrt observes, "they like to work with wood, but not automatically". They always consider the overall context and the suitability of its use. The same was true of the façade in Psáry.Planed larch prisms are produced by SECA, the largest manufacturer of profiled timber in the Czech Republic.

The architect chose 44 × 68 mm prisms for the school, which were made to order. SECA focuses on planing the standard range, which currently offers over 100 products, but also offers the possibility of producing special profiles, which is increasingly used by Czech architects.Prisms are installed on the facade in one or two layers, for shading purposes only in one layer, which, when viewed from a greater distance creates an interesting structure. Wooden elements in contrast to the smooth white wall and bright roofs without overlap excel and break areas that would otherwise have a sterile effect.

Natural material and its transformations

Wooden facade and shading elements were installed without surface treatment. In the spirit of current trends, the architects decided to use the gradual colour changes that the facade will undergo, and which will also influence the appearance of the building itself. Architect Pihrt considers the way in which raw Siberian larch ages and responds to the weather as a priority. “We like houses to live and gradually get a natural patina. The use of materials that can age is one of the basic principles of our designs,” SOA architects added for themselves and the SOA team.

SECA has previously engaged in research into the surface degradation of Siberian larch and the colour changes associated with this process. These changes, and hence how the appearance of the New School with Scribes will evolve, were described, for example, by Ing. Eliska Oberhofnerova, PhD. z ČZÚ. “Already within a few months, colour changes will occur, due to the decomposition and leaching of lignin and extractive substances, which will intensify over time due to the deposition of air pollutants in the damaged wood structure. However, when professionally installed, these surface changes do not affect the stability, strength, or function of the timber elements themselves. The result will be a dark brown to grey shade of wood, sometimes even silvery, while the rate and intensity of colour change will depend on the orientation to the cardinal points and the degree of exposure of each part of the facade to the weather, ” summarizes Ing. Oberhofnerová.

The use of wood in the interior and exterior of the building is increasingly occurring not only in the Czech Republic, but also in many other countries. The influence of wood on the human body is dealt with in a number of expert works. An Australian study from 2018 concluded that employees feel more comfortable in a workplace surrounded by wooden surfaces. The Marist College Bendigo case study confirms the soothing impact of natural materials on students.

Psáry, in cooperation with SOA architects, created a modern school for the 21st century that reflects current trends in the concept of space and its relation to natural materials and sustainability. Congratulations to the whole team for an interesting building and wish pupils and visitors of the school a pleasant time in this beautiful building. 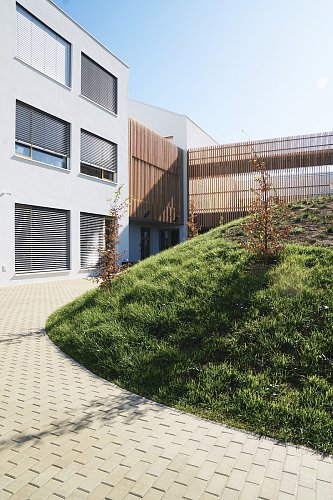 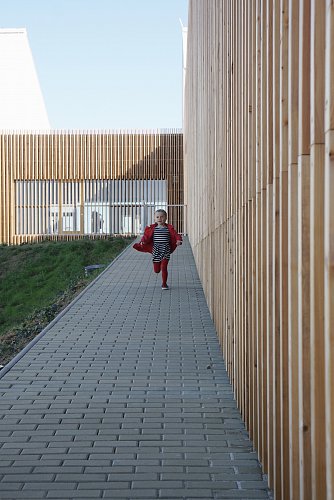 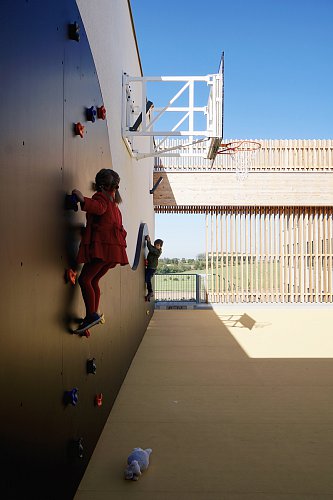 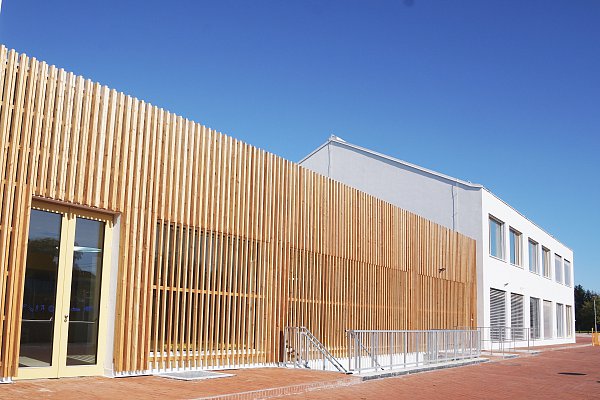 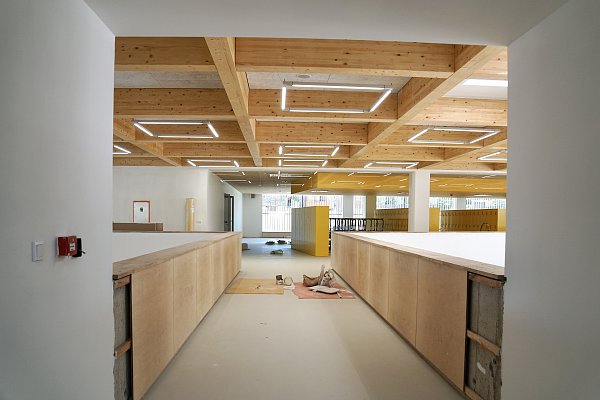 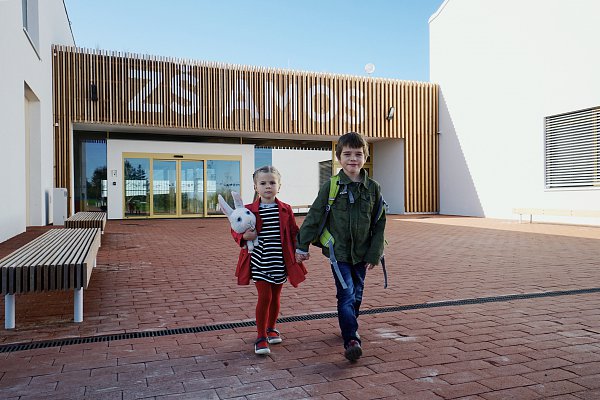 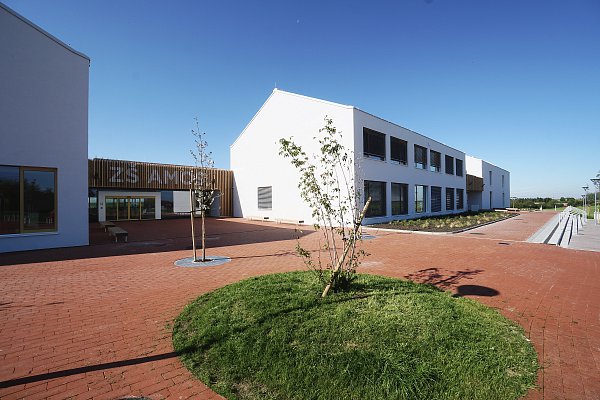 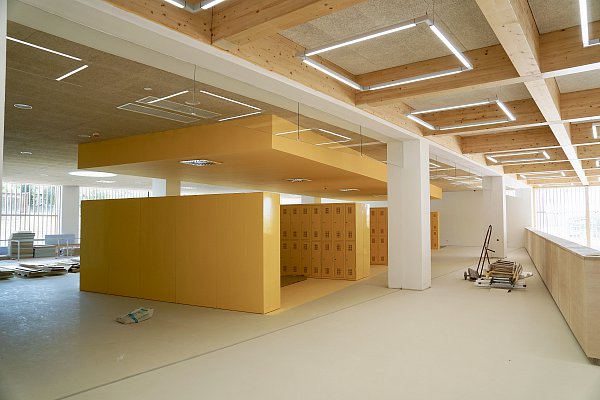