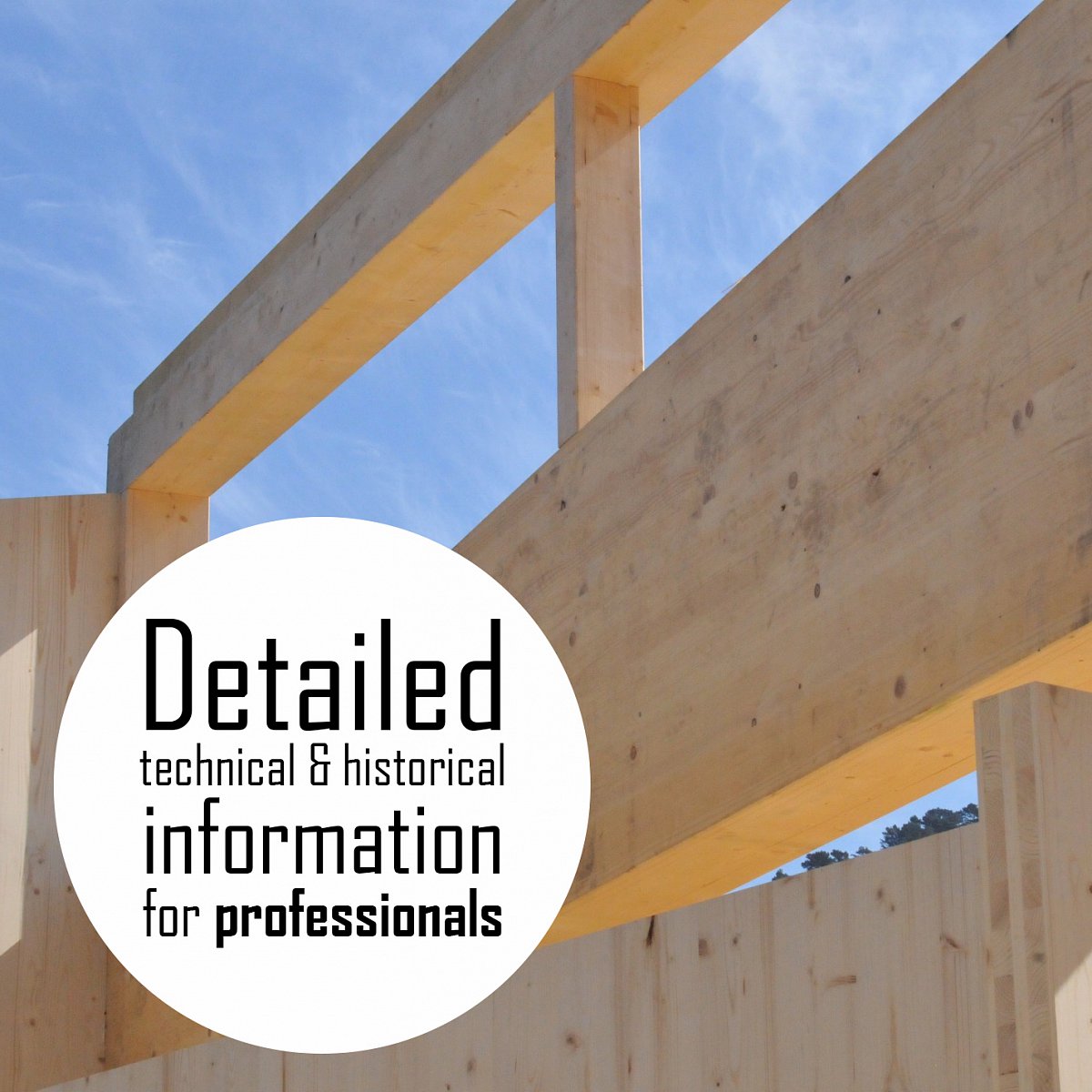 WOOD AS A BUILDING MATERIAL

For its availability, relatively simple processing and mechanical properties wood belongs to the oldest materials used in constructions. Thanks to its undisputed advantages wood structures found their utilization in almost all cultures and in all stages of development of human society. The wood was primarily used for building the simplest human settlements intended to protect humans against external influences. With the gradual acquisition of knowledge about the wood properties and with increasing level of tools and machinery, the use of wood started in more complex constructions such as bridges, railways, roofs, multi-storey buildings, indoor buildings and residential houses. From way back the knowledge of wood properties is a prerequisite for its use in building construction. By constant examining the properties of wood, new materials, which overcome wood disadvantages (dimensional changes in response to the changes of humidity, limited size, different properties in different directions, flammability, and presence of natural defects and possible attacks of biological pest), are being developed. The development of wood materials is closely connected with the development of manufacturing technologies, fasteners and adhesives.

The technology of glued solid wood is significantly applied in the area of bearing wood structures. The history of the technology dates back to the 19th century, when the first construction of glued laminated wood, as we know today, has appeared in England. Otto Hetzer, who in 1906 acquired the patent for glued laminated beams composed of two or more lamellas (glued by the way that the wood fibres are parallel), is considered to be a pioneer of this technology. With the Hetzer´s construction method one no longer had to stick to the length or cross section requirements of the component imposed by the nature of trunk diameter. The technology of gluing allowed to use even less dimensional elements and combine them into one, moreover, twisting of wood is minimized. This discovery started a new era in wood constructions.

Great progress was also achieved in the area of used adhesives. Until the early 50’s casein adhesives were used. The resorcinol-formaldehyde adhesive, which does not lose its properties even in humid conditions, was a significant discovery in the area of glued timber. Since then it has been possible to use glued-wood profiles outdoors also. The use of melamine-formaldehyde adhesives was another development. Currently used adhesives do not content free formaldehyde, some of them are additional without bond formaldehyde. In the 40’s of the last century the finger jointing, which ensures sufficient elasticity, was also developed. It is still used for longitudinal connections of bearing elements. An extreme progress is apparent in the production process. From the initial touch of carpenter, through the implementation of mechanization, to today's fully automatized machines controlled by computer. This modern system enables accurate, fast and variable production.

Current technology of glued solid wood is in accordance with the stringent requirements of European standards. The attention is paid to the input material, to the production process and equal to the method of application of the wood element. The input material designed for the production of glued solid wood is chemically untreated wood from forests certified PEFC. The primary input materials are coniferous trees, mostly spruce. In the production process the high modern CNC machines are used. They ensure the accuracy and speed of production. Generally, this technology consists in connecting of particular machined, dried and of the defects divided elements (lamellas), which are longitudinally connected by finger jointing. The lamellas are provided with a layer of adhesive and pressed under high pressure. The method of gluing preserves the wood from damages. The material does not lose strength as it is with carpentry joints. The strength of joints is required to be higher than the strength of the wooden material itself. It means that during the stress of glued joints the wood should be separated outside of the joint. Ecological adhesives with no health risk are used. There are regulations concerning material producers and manufacturers of wooden buildings which have to be obeyed. Nowadays, glued wood has reached high load bearing capacity and enables to span several times greater distance than solid wood. Compared to solid wood the glued wood exhibits superior dimensional and shape stability, improved fire resistance and visual quality.

KVH is a structural timber made of four-side cut profiles of coniferous wood which are longitudinally connected by finger joints. Particular wooden elements are deprived of defects and kiln-dried to 15 % moisture (± 3%). Thanks to the method of cutting used and the low moisture content of the material it has less propensity for cracking, is dimensionally stable and, subject to due observance of the rules relating to the structural protection of wood against biological attack, can also be used without the need for wood preservatives. The main difference compared to conventional structural lumber lies in attaining lengths (up to 16 m) and special requirements (set humidity, finger joints, and used adhesives). KVH is most often used to support the constructions of frame buildings, ceiling beams or truss structures visible from the interior.

Duo/Trio laminated beams are industrially manufactured products made of either two or three lamellas glued together by their flat side with the fibres running parallel. The lamellas are glued in the position opposite to their natural position in the trunk to acquire better dimensional stability. Obtained dimensional stability and low moisture content make them particularly suitable for the construction of timber houses. The classic character of the beam and appearance of solid wood is well preserved. The range of the use is similar to KVH. They have excellent characteristics as a building material for exposed ceiling beams and rafters.  §  GLUED

Glued laminated timber is a bearing element formed by gluing at least two parallel wooden machined lamellas. Glued joint has not a negative influence on the mechanical properties of wood. The element of glued laminated timber is statically assessed as a compact profile. Among the most significant benefits the exact shape, dimensional stability, surface quality, strength classes according to harmonized standards and arbitrary dimensions of the beam are included. Elements of glued laminated timber are designed for statically loaded wooden structures, such as roof trusses, joists, girders, beams, columns and construction of bridges and footbridges. Modern glued laminated timber, a technologically demanding product, has established itself as a building material, especially for buildings with large span lengths over 100 m.

CLT panels are made of dried coniferous lamellas (about 8%) compounded into an odd number of layers which are mutually perpendicularly rotated. That ensures dimensional stability of the panels during humidity changes. The lamellas are glued under high pressure. Melamine-urea-formaldehyde adhesive without free formaldehyde and polyurethane adhesives (formaldehyde-free, which are approved by European standards for construction of load-bearing wooden building components for interior and exterior) are most commonly used. CLT panel’s inconsequence does not burden the environment with harmful emissions, while creating a pleasant microclimate that has a positive effect on human health. The modern CNC machines are used for cutting the wood. By the use of insulation materials with low diffusion resistance, vapour permeable building envelope without a vapour barrier is achieved. The most significant advantage of this system is the simplicity in design, the minimum number of joints, fire resistance, short period of construction (several days) and the possibility of exposed solid wood in the interior. CLT panels are used for the surface structure of walls, ceilings and roofs.

The higher the requirements for construction are related to the increasing level of technology of wood materials. Dimensionally stable, accurately machined and dried timber is required. With the development of fully automatized production controlled by computers, with used adhesives and protective substances and together with the increasing popularity of wood structures glued solid wood for bearing purposes has virtually unlimited potential in the field of construction.